What would you do if US, UK and EU government are displeased with your unconstitutional usurpation of separation of power? How would you react if Transparency International discovered your government hijacked Trader-Moni and is using it to rig the election as Trade-Your-Vote-For-Moni? Simple, try and change the topic by crafting and circulating a video of a PDP podium crashing, while hiding videos of APC podium and roof crashing in Borno and President Buhari almost falling in Lokoja.

Faced with mounting criticisms at home and abroad over CJN unconstitutional suspension and the bombshell revelation that Trader-Moni 2.0 is actually Trade-Your-Vote 1.0, APC decided to go extremely low by editing and distributing a near tragedy of a podium collapsing during a PDP rally.

Fact is, APC remains the only party to ever field the worst performing candidate in the history of Nigeria (see table below), and no amount of video editting can change that fact. 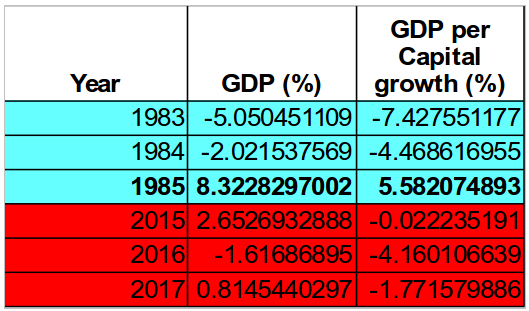 Nigerian’s GDP and GDP per Capital Growth under Buhari. GDP jumped to 8.3% after Babangida sacked Buhari's Government in 1985

Observe, PDP possesses videos of Buhari almost falling during a rally, yet they refuse to gloat over it, PDP equally possesses videos of APC podium collapsing along with the roof in Borno, yet they saw it as a tragedy, indeed a participant at the Bornu rally died of injuries sustained during the podium collapse. In a nutshell, PDP acted as the adult in the room, the adult who wish to address issues facing the nation.

APC’s response is troubling, it reveals a calculated attempt to change the national discuss from matters affecting Nigerians to trivial and cartoonish discussion by gloating over tragedies. Yes I laughed when I first saw the video, until I realised the lives of those on the podium could be in danger, that was when I discovered it was indeed a SICK joke. Sadly, APC has become the party of children, in the deadly mould of Lord of the Flies.